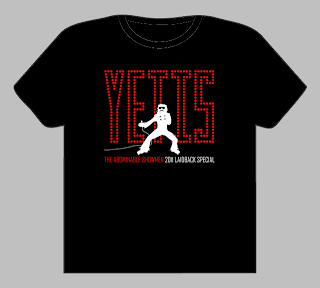 The Abominable Showmen are playing the Irish Centre on Thursday May 19th, and all the money will be donated to charity in memory of our friend and colleague Bruce Chaplin.

Let's get the place full and raise as much as we can.

If you want a ticket please let me know, we have them now and they are £4.

The Abominable Showmen shall be conducting their next gig on Thursday 19th May at the Irish Centre!
As usual it will be a half seven kick off and the theme this time is "Las Vegas".

Tickets will be £4 quid each and T-shirts will be available, cost depending on quantity ordered. (T-shirt design yet to be finalised. I shall post it when I get it).

All proceeds will be donated to charities in memory of their much missed colleague Bruce who was unfortunately killed in a traffic accident last October.
The now traditional Showmen event is always a cracking bash and they simply get better with every show.
The last one was a stormer and this one will be no exception.

So if you're up for it, get in touch with me and I'll sort out any ticket and/or t-shirt reservations for you.
Spread the word to owt as may fancy, not forgetting those who've departed and may want to keep in touch.

Just to let you know that we raised £700 from our gig at the Irish Centre.

Thanks to everyone who bought tickets, gave donations, bought shirts and helped to make this amount, especially Capgemini for paying for the practices and room hire.

We have decided to split the money between the Lake District Mountain Search and Rescue and The Intensive Care Unit, all money will of course be donated in memory of Bruce.

See you all again in November for our Disco themed gig......

The Abominable Showmen
Posted by Sas at 12:37